WE HAVE A NEW HOME

The Knights of Gidea Park Junior Chess Club has moved it's interent footprint,to a new website.
Click here to visit
Please follow the Knights on our new home.
Posted by gpjcc at 10:50 0 comments

The English Chess Federation (ECF),has awarded the Knights of Gidea Park Junior Chess Club,CENTRE of CHESS EXCELLENCE status.
This is National recognition of a new chess club,and all members of this chess club can feel proud.
Posted by gpjcc at 11:26 0 comments

The grading system the English chess Federation (ECF) uses determines a players chess strength.
The higher the grade number the stronger the chess player.
Grading points are gained or lost from results of games played in tournaments.
The more games you win the higher you grade.

The ECF has a range of chess titles that players can qualify for.
They start will Chess Maestro going up to National Master with others in between.
Players qualify for each title by having a certain grade.
The Chess Maestro title requires a minimum grade of 95 on the ECF grading list.

The Knights have several players with grades,but one Knight has a grade above 95,so qualifing for the Chess Maestro title.
That player is Niall Ali,he has a grade of 96,and was granted the title of Chess Maestro in early October,this is a life title.
Well done to him,Niall now has the Team Master title in his sights,this requires a grade of 120. 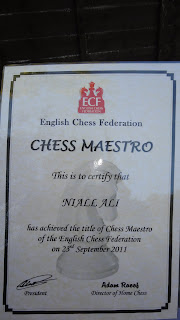 These tournaments will have under 9 and under 11 sections,and would be great for players from the Knights to gain tournament experience.

As soon as entry forms for tournaments become available i will post the links to them.
Posted by Knights of Gidea Park Junior Chess Club at 11:34 0 comments

The planned club training day proposed for the 2nd of September has had to be cancelled.

This is partly due to a lack of numbers, as players are away on holiday.

The chess club will start as normal on Friday September 9th.

Also new for this season we are going to have a beginners club,this starts a week later on Thursday the 15th.
Posted by Knights of Gidea Park Junior Chess Club at 12:29 0 comments

This is a game played in the Bled tournament in 1961.
The winner of this game is Bobby Fischer,perhaps the greatest chess player ever.
Fischer was World Champion in 1972.
He died in 2008 aged 64.
64 is also the number of squares on a chessboard.

In this game you will see TACTICS,the usual ones,PINS,FORKS and some you may not have seen. Queen SACRIFICE,knight OUTPOST on d6.

While you are playing over the game look for TACTICS,perhaps you could use them in your games.
Also enjoy a great game.

The Knights chess club will open on Friday the 9th of September 2011.

But to get you up and running after weeks of no chess,a training day has been arranged to get you back into shape.

The day will be a good mix of training and tournament play, a great start to the new chess season.

Meets between 3:45 and 5:00 pm Thursday and Friday during school term time.
At the Quaker Meeting House
7 Balgores Cresent
Gidea Park
RM2 6AB
The club has an English Chess Federation accredited chess coach with an enhanced CRB.
Contach the club on 07941818617
or e-mail
knightsofgideaparkjcc@gmail.com

Puzzle of the day

VISITS TO OUR SITE